With the release of the new Dark Angels Codex yesterday I have written a new Deathwing army list! I thought I had resisted the temptation all this week but I finally caved and have decided to revisit the army. I’ve painted easily over a hundred Deathwing terminators over the last few years through various commissions and projects, all starting with my original Deathwing Army and my Angels of Redemption. You can see all my Deathwing related posts here 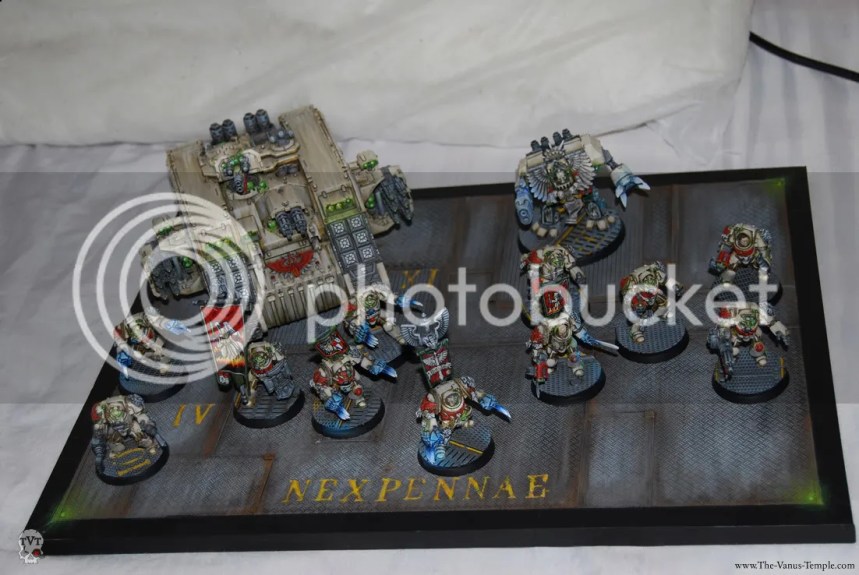 Belial
– Sword of Silence and Stormbolter

The main tactic of the list will revolve around the Standard of Fortitude bubble. For readers without the book it grants a 12″ bubble of FNP similar to a Sanguinary Priest. It’s a bit pricey at 85pts but if it saves 2 terminators then it’s made its points!
The wording on Deathwing Assault is a bit unclear whether the entire army can deepstrike, or half of it, but this will still work anyway. The Command squad will land first with the librarian, probably on a flank. Then Belial and the unit of Knights will land within 12″ of the banner, using Belial’s no-scatter rule to make sure they land in a decent place.
The other two squads will either deepstrike nearby too, or walk forwards depending on the ruling of Deathwing Assault. They will sit on objectives and the assault cannons will be on anti aircraft duty when needed, combining the powers from the Librarian (Prescience of course) to become twin linked. Most aircraft should both the army that much, but mass fire from fliers like Necron scythes will hurt.
The Librarian, as mentioned, will take Divination powers, as all but powers 5 and 6 are very useful for the army. Re-rolling to hit from the primaris power is as useful as a Chaplain for the Knights!