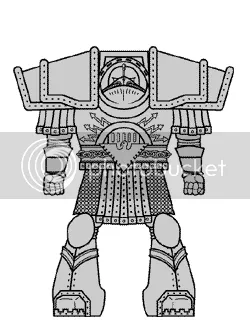 The suit seen here dates from the time of the Horus Heresy civil war and is primitive by today’s standards. The Heresy tore mankind in two and wrecked much of the Imperium’s infrastructure and manufacturing capabilities. As a result the quality of Marine armour suffered as Chapters’ manufacturing facilities were destroyed or deprived of raw materials. In addition to these crippling restrictions, demand for new suits and replacement parts increased as every Marine in every Chapter was constantly in action. Thus, improvised forms of protection were employed and both standard Marine suits and Terminator armour from this period often look medieval. The chainmail and re-enforced leather straps serve to protect the vulnerable joints in the groin and arm pits. Rivets were needed to secure the armour plates as the materials required for a more flush appearance were scarce. Even the design of the shoulder pads was a product of restricted manufacturing methods – their curvature is much reduced from the traditional “dome” shape which is time-consuming and costly to fabricate. Despite these hindrances, the Terminator suits made during the Heresy performed well and the fact that a handful are still in existence today is testament to the skills of the Chapter Artifaciers.

Notes & Sources:
These suits feature in the Horus Heresy CCG artwork. They are obviously designed so as to convey the limitations of the technology that existed in what was the distant past of the Warhammer 40,000 universe. The liberal use of rivets, leather and chainmail all serve this purpose, though it is interesting to note that with the current re-draft of the Space Marines (and in particular with the Ultramarines) such classical and medieval design elements are being introduced into the “new” Legiones Astartes warriors. It is unlikely we will see hard copies of these proto-terminators.