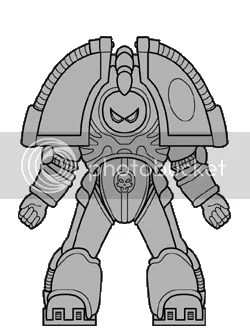 In the wake of the Horus Heresy Space Marine Artifaciers experimented with several bold new designs for Terminator armour, and this is one of them. A cursory glance reveals that it is made for frontal protection. The huge shoulder pads and sunken helm afford maximum defence from enemy fire. Such was the bulk of the armour that all necessary cabling is very prominent. Each tube contains multiple cooling ducts and fibre bundle relays. Though it looks unfamiliar one can see traits of later Terminator design in gestative form. The tubular ribbing on the edges of the armour plates, the high mounting of the shoulders and heavy boots are all recognisable. The disk on the left shoulder pad was where the Chapter icon was displayed. The nature of the design on the plastron has been fiercely debated by Imperial art historians – some say the design is a pair of stylised eagle wings while others contest that the resemblance is coincidental and they are ribs that reinforce the chest plate. Very few of these suits remain today, and those that still function are venerated and reserved exclusively for ceremonial use. The most cogent hypothesis as to its demise is that its bulk was simply too great and the Mark 2 design, which was being developed concurrently, proved more successful.

Notes & Sources:
The label of “Mark 1” is speculative – this design appeared briefly in the literature in conjunction with the design labelled “Mark 2”. These terms have been assigned, quite reasonably, on stylistic grounds. Note the design of the elbow joints – this was a common feature on both the elbows and knees of the first standard Space Marine suits.

The back banner is part that was originally included, but is very hard to come buy due to the size and breakage, making a complete Mk1 a very rare occurrence. 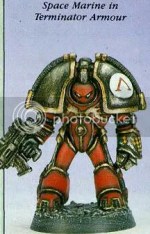 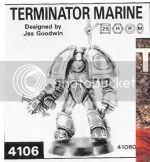