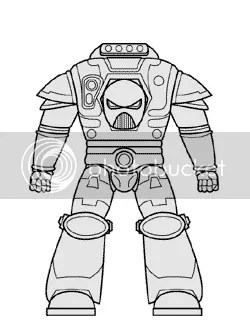 Quite different from its predecessor, we begin to see clearly the distinctive Terminator shape with the reduction in size of the shoulders and a more hunched stance. This is due to superior heat ducts being mounted behind the shoulders. Another practical advantage of this was that the Mark 2 armour could fit into smaller spaces – an important fact given the space hulk and Hive world cleansing missions Marines were assigned to. Interestingly, the tubing on armour edges was replaced in this phase with a more geometric pattern of reinforcements. The abandonment of this feature and re-installation of the tubes in the Mark 3 prototype suggests the design was unsuccessful.

Notes & Sources:
Again, this phase only appeared for a brief period. The general look is very reminiscent of the Mark 1 Imperial dreadnought – the rectilinear design elements on the limbs, the very rounded shoulders, rather blank face mask and (most notably) the shape of the eye lenses. Though some literature depicts these suits carrying standard bolters, other sources show two tubular weapons attached to the outside of the right gauntlet. This is a feature reminiscent of the twin bolters mounted in a similar position on the Contemptor (or “Chuck”) class Mark 1 dreadnought. The down-turned grill “mouth” is also a feature of note. This is one of the first instances of the eventual redesign of the Marine “beak” faceplate culminating in the arrival of the Mark 7 standard Space Marine suits. 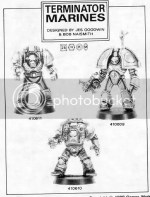 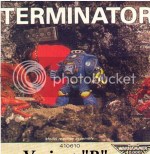