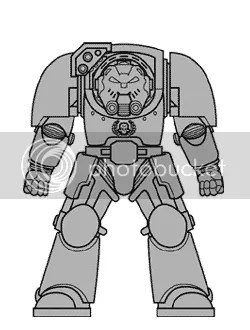 This is the latest stage of development of Terminator armour and, again, is little more than a refinement of the Mark 3 series. Increasing reports of damage to the vulnerable hip joints have prompted the inclusion of dedicated shields whilst the ever-important chest plastron has again been modified. New advances in gyro systems for balance are incorporated – the evidence for which can only be seen by the small tubes that protrude at the suit’s ankles. The wrist joints are also improved in their design. The HUD module is now bigger to accommodate the increased array of sensors and lenses that allow greater synchronisation between the suit and the weapons.

Notes & Sources:
This recent overhaul of the Terminator design brings it into line with progress made in appearance of the Space Marines in general. The suit is now bigger and takes on the “Anime” proportions bestowed on the rest of the range – longer legs, wider shoulders and a bigger chest. The larger bases and plastic component nature of the hard copies allows for more versatile poses especially in the legs giving the suits more dynamism. The hip shields are inherited from the new Grey Knight designs. Characters in Mark 3c suits are available, along with chapter variant terminators either through full kits or conversion packs. 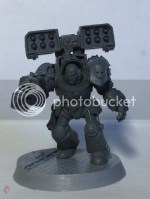 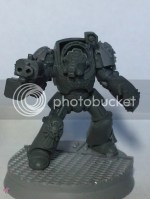