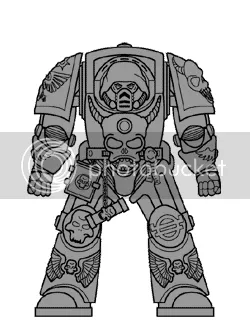 There have been many pompous Imperial Governors who have desired a suit of Terminator armour for their own personal aggrandizing, but such a prestigious status symbol has remained out of their grasp for several reasons. The armour is expensive to maintain, the training needed to operate it is long and the surgery required to integrate the wearer’s body with the on-board systems is complex. However, the most insurmountable factor is that Terminator suits cannot simply be manufactured. Much of the knowledge of how to make them has been lost and that which remains is privy only to only the skilled Artifaciers of the Marine chapters. Consequently, most suits are inherited and are a valuable resource that no Chapter would consider letting out of their stores.

The only group outside of the Index Astartes Space Marines who have access to Terminator armour are Inquisitors. The Ordo Malleus wing of the Inquisition possesses its own Terminator suits used by its chamber militant – the Grey Knights. Consequently the organisation does have the knowledge, components and skills to equip its non-Marine servants – but only if their mission is important and their influence strong. Indeed, the Ordo Malleus jealously guards its knowledge from its sister Ordos; Xenos and Hereticus, as a consequence of the secret struggles and vendettas that plague these supposedly companion institutions. Therefore Inquisitors dressed in Terminator armour are almost exclusively Daemon hunters.

Like the Grey Knight’s suits, Malleus Inquisitors’ armour is highly decorated and sports a vast array of ward sigils, reliquaries and charms to fend of the infernal threats they face. Psychic apparatus is often incorporated, and weapons might include the rarest examples of Psycannons, Force Rods and Combi-Weapons. Indeed, some Inquisitors have been known to include their most precious Jokaero digital weapons into their suit’s arsenal.

Notes & Sources:
The illustration depicts one of two hard copies that were produced in the early 90s, contemporary with the Mark 3a range. Of interest is that the iconography of the Inquisition had not yet been fully established, so this example does not feature the three-crossed-“i” that is now customary. Instead a crossed-circle device is present on the left knee. In addition, the sword-and-book symbol of the Grey Knights had not yet been defined, and in the earliest Malleus army list the Chapter is identified by an eagle clutching a rod and an axe in its talons. Four arms were produced for this small range touting a Combi Weapon, a Force Rod, a Psycannon and a Power Glove (that featured Digital Weapons on its knuckles). 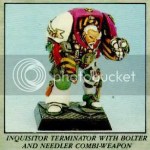 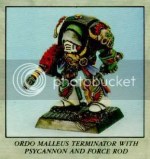