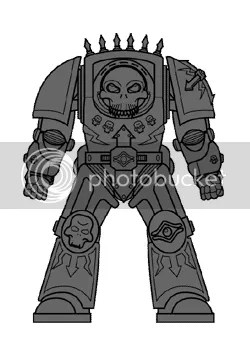 The virus bombing of Istvaan III mark the beginning of the Imperium’s descent into bloody civil war – the Horus Heresy had begun. The Legions Astartes were not exempt from the schism that divided mankind. Half the chapters turned against their brothers as they succumbed to the lure of Chaos. Thus humanity’s finest equipment, designed to combat alien threats, was turned on its creators and Terminator armour was a much sought after tool in this war of men. At first, traitor legionnaires crudely daubed their armour with the colours and markings of Chaos, but as time progressed the suits themselves were modified to show their wearer’s allegiance. Partly the work of twisted rebel artificiers, partly the whim of the Chaos gods made physical, the suits’ designs reflect the rank disorder of evil powers. Traitor Terminators are some of the most feared members of the Chaos Marine raiding parties that now plague the Eastern fringes of the Imperium.

Notes & Sources:
Initially introduced as alternative troops for the first edition of Space Hulk, these suits quickly found their way onto WH40K tabletops. Several Chaos Undivided bodies were produced as hard copies, including a sergeant. Numerous weapons were made, all featuring grotesque design modifications to distinguish them from their Loyalist cousins. 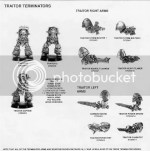 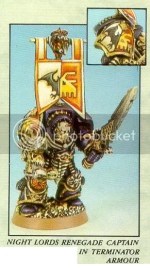 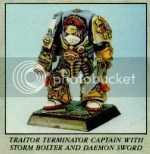 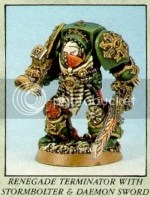 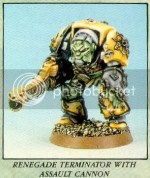 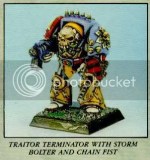 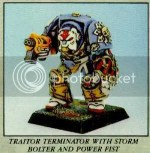