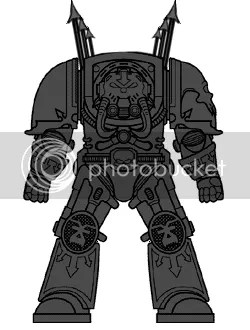 During the Horus Heresy a number of the Adeptus Mechanicus warehouses on Mars fell to the traitor legions. They pillaged the stock rooms and were able to equip many hundreds of traitor legionnaires with the latest weapons, ammunition and equipment. Their main aim to secure suits of the new Mark 6 standard Space Marine armour that had just rolled out across the Imperium, for its use by loyalists was giving them the edge in combat. The traitors were surprised to come across a new version of Terminator armour – the Mark 3b. Hence these suits found their way to the trenches on the backs of the Chaos followers. The thousands of years that these vanquished troops have spent under the influence of the Chaos gods in the Eye of Terror has warped their armour into strange and twisted parodies of its former shape. The all too frequent addition of gruesome trophies further distorts their appearance.

Notes & Sources:
The Mark3b traitor types are one of the newer additions to the Terminator range and Chaos Undivided types have appeared as hard copies. They are encrusted with detail and their spiked trophy racks and tusks make them highly distinguishable from the Loyalist suits. All the weapons have been re-designed with the addition of chains, daemonic faces and Chaos sigils covering their surfaces. The above image pictures a Khornate Terminator. 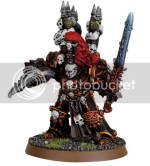 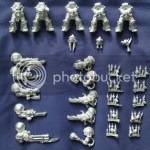