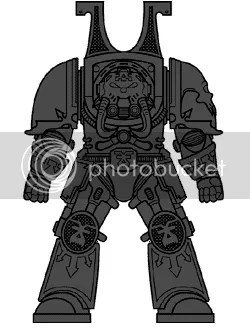 This is the latest stage of development of Terminator armour and, again, is little more than a refinement of the Mark 3 series. Increasing reports of damage to the vulnerable hip joints have prompted the inclusion of dedicated shields whilst the ever-important chest plastron has again been modified. New advances in gyro systems for balance are incorporated – the evidence for which can only be seen by the small tubes that protrude at the suit’s ankles. The wrist joints are also improved in their design. Naturally the Traitor Legions are able to keep up with the latest designs in the armour through various ways, entire chapters can turn to Chaos bringing with them the newest technology or the suits could be simply salvaged from battle.

Notes & Sources:
The new Plastic Chaos terminators brings the Chaos range up to date with the Imperial Terminators. The suit is now bigger and takes on the “Anime” proportions bestowed on the rest of the range – longer legs, wider shoulders and a bigger chest. The larger bases and plastic component nature of the hard copies allows for more versatile poses especially in the legs giving the suits more dynamism. The hip shields are inherited from the new Grey Knight and Imperial Terminator designs. Characters in Mark 3c suits are available, however the older Characters such as Abaddon are now starting to look too small. They are encrusted with detail and their spiked trophy racks and tusks make them highly distinguishable from the Loyalist suits. All the weapons have been re-designed with the addition of chains, daemonic faces and Chaos sigils covering their surfaces. One point to note is the lack of the HUD. The Chaos suits somehow picked up the hip shields but not the HUD in their design, this is probably due to the Trophy racks.
Conversion packs have been released by Forge World for power specific designs.