Introducing The “Wings of Sanguine”

Since I moved back to Bridlington I’ve been busy sorting through all the random bits boxes I’ve accumulated over the last 10 years, luckily my parents kept all the crap I had when they moved house, and I added to it with the stuff I’ve collected at university!

I noticed I had a fair bit of Marine parts, legs, arms, torsos etc, enough for entire Space Marines. I found my old Landspeeders and a Predator I had bought for the original Shrike list back in 5th as well as some scouts that were originally for the Angel of Redemption

So I spent last week assembling a Marine army from the the boxes and ended up with this: 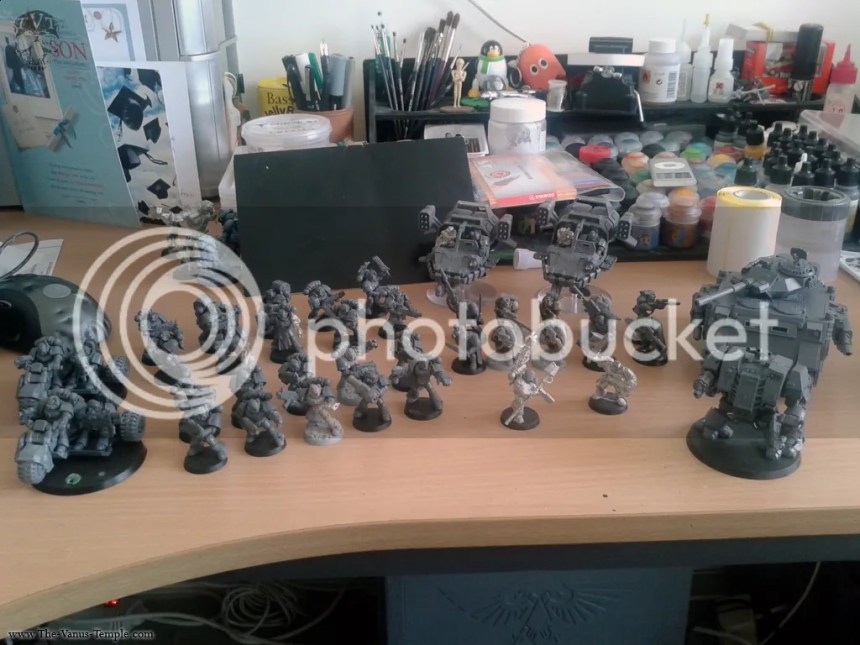 This guy started out as a Legion of the Dammed bolter guy. The backpack is from the Legion of the Damned Sergeant and the staff is from one of the Librarian models. Not sure on the Plasma pistol, might be the LotD sergeant again. I plan to take the Divination discipline and have upgraded him to Epilostary

I have accumulated a lot of BA and DA bits over the years, and I really like the marine heads with the laurels from the Sanguinary guard. They were perfect for veterans. The combi flamers were inspired by FW’s combi flamer and were made by simply chopping off the bolter barrel and sticking the flamer end on, slicing off the igniter on the end to give it a more uniformed look. They use a lot of different kits in total, devatstators, deathcompany, sanguinary guard and a few others. The squad sergeant, Julo Decon, has an arm from the LotD again.

I won this guy from http://dilusionsofgrandeur.blogspot.co.uk/ a while back, I stole his backpack for the Angels of Redemption Priest I used in the Doubles army instead of more scouts. Because of all the Blood Angel parts I’ve used I’d decided early on that the army would use the BA codex, especially as I have two heavy (dread and predator) and two fast choices (Bikers and Speeders) that can become scoring in certain missions!
I might eventually replace this guy with one of the FW apothecary’s as they’re really nice models.

Standard tactical marines, with a few fancy shoulder pads and helmets! The metal auspex is from the tank commander who’s name I’ve forgotten. I gave the sergeant a plasma pistol mainly because it looks cool, and at close range this unit can put out three plasma shots (four with the Librarian) which can be quite brutal.

Most of these were from the Angels of Redemption, they never got finished because they were replaced with the Apothecary. I really like Sniper Scouts, and with 6th edition they are cooler! Precision shots rock!

I used to use a pair of Typhoon speeders in my old Shrike list, they make great little support units that can relocate pretty easily. In 6th edition they can now mover 12″ and still fire two weapons too! With missiles and multi-meltas they can take out heavy vehicles as well as infantry. I lost the original crew so I chopped up some servitors to act as the gunners, just trying to find something for their arms now.

I never liked the armoured panel on the front of Space Marine bikes, which is why these guys have bolters attached and in their hands. I also never liked the pintle mounted weapons (also I lost them) soused devastator Multi meltas on the gunner. Eventually I’ll turn these into full bike squadrons but for now both the attack bikes act independently, striking out at tanks and generally making a nuisance of themselves.

I seem to have lots of random Dreadnought bits everywhere, forgeworld weapons, ironclad arms and leftover plastic arms from venerable dreads. This guy had had his arms sawn off (as they were glued), luckily I’d done a neat job at the time and was able to glue an assault cannon and a mix between a normal dreadnoughts arm and an Ironclad. At the moment he feels a little off balance so I might try and convert the assault cannon arm a bit. I gave him a heavy flamer so he can overwatch with it when he get’s charged.

I originally built this for the Angels of Redemption, I had a pair of Predators with Autocannons and Heavy Bolters. I decided on Lascannons this time over the Heavy Bolters mainly because of the BA overcharged engines rule. This guy can now move 12″, fire both his Lascannons and snapshot his Autocannon, or move 6″ and fire everything. Very useful!

I’ve decided on a dark metallic colour for the army, with red shoulder trims and details. I used the Bolter and Chainsword Space Marine Painter for the basic colours, then took the exported image into photoshop and added some weathering, glow and shading to give it the metallic look: 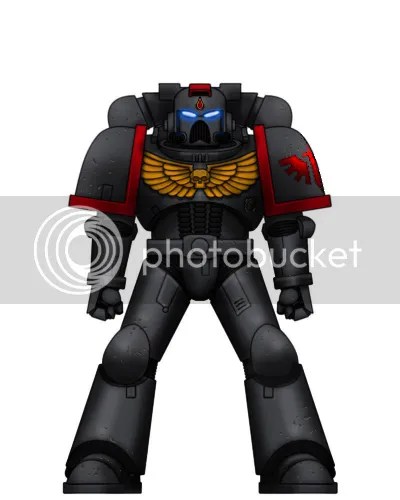 Eventually I’ll write some fluff and history for army, as I really enjoyed using a normal marine force in the couple of games I’ve used them in so far.