I’m going to do something I’ve never done before, a Product Review!
With my recent venture into the world of square bases and Fantasy I decided to pick up a couple packs of Modular Movement Trays from Games-Workshop. 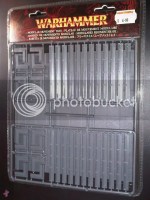 What these allow you to do is basically build your own movement tray to the required size, now, my Gobbos are in 5 ranks of 8, which makes using a standard movement tray a pain.
At only £6 this kit has a LOT of stuff, sure it’s only movement trays and even with my mass Goblin horde I find this extremely good value. Here’s a break down of what you get:

Firstly, you get TWO of these large plastic sheets, they’re 1mm think and on one side they’re marked with 20mm squares and the other marked with 25mm squares, this makes cutting them pretty easy although I’d recommend using a Hobby saw.

From just ONE of these I’m able to create two 40 gobbo sized movement trays and have 20 squares in two rows of ten left over for my archers. That’s 100 bases worth from one sheet if you have 20mm bases.

On this sprue you get 24 straight bits and 16 corners. The corners measure 20mm in each direction and the straight measures 85mm.
Because of my large unit sizes I’ll have a fair few of these pieces left I imagine. They will almost certainly require some cutting if you have weirdly sized units, as you can see from this photo, I’d tried to minimise my waste by using every bit I chopped up, I plan to cover the entire base in flock and detail afterwards and the gaps can be filled with card of greenstuff if you wish.

There’s only ONE downside to this kit, there appears to be about 1.5mm of space around the inside of the base, this causes all your models to shift around a little but it can be easily filled with a strip of plasticard or even filled with flock. I plan to stick a piece of masking tape across the areas I don’t want flocked and fill the gap. I suppose it’s to allow the “bigger” models that don’t rank up too well to sit next to each other without the end guy getting pushed off!

Over all I feel this a fantastic kit for it’s price, especially for those cavalry or infantry large armies.
I shall award this kit 9 out of 10 Stars!