Yesterday I mentioned having found a couple of boxes of my most precious models. I revealed one that contained plastic Hybrids, today I shall reveal the other!

Here is the BOX. The Crux Terminatus symbol isn’t attached… yet. I plan the spray the box black and make it cool. Rivets and stuff.

But what’s inside?! Well.. as you could probably guess. TERMINATORS!
These three are the original Terminator sculpts before they were redesigned for Space Hulk. Also known as the Mk I, II and III, or “Exo Armour” 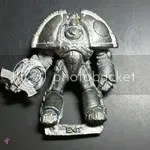 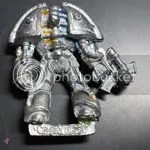 The MkIII (Again I believe)

They all still need some cleaning, and assembly. I’m also working on getting a replacement for the MkII as it’s a bit of a bad cast around the head area.
One day I hope to make an entire army of just the Mk I “pea heads”. Would make a pretty awesome force!