I wanted to post them all with criminal cards against a background like they’d been arrested.. but though I’d better spend my time updating site instead -_-

Of course each of these armies needs a “Belial” model, Belial is the Leader of the 1st Company in the Dark Angels codex, he’s nothing special, bog standard stats but quite cheap for only 130 points.

The first Belial is for my Space Hulk army, he’s made from one of the original 3 terminators sculpts before they were redesigned for Space Hulk, with a pair of lightning claws from the Rogue Trader Terminators. Don’t worry, I have another in perfect condition. 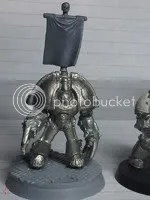 He’s quite tall compared to the others. Despite being a Pea Head.

Next up we have Mini Belial. He’s made from the Rogue Trader Sergeant with the Grenade Launcher Powerfist. His funky StormBolter is from the previous model, attached to shoulder of the original lightning claw, recycling for the win. One thing about these terminators is they’re small and all have a “falling forward” pose. Basically their standard pose is leaning forward instead of straight. 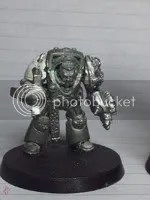 Lastly we have my current Belial, he’s made from FW’s Red Scorpion character, with lightning claws from normal Terminators, and a Banner from various pieces.
Here’s an Un-sprayed version: 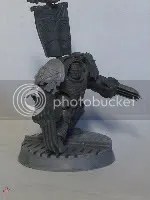 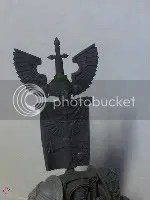