I’m doing that thing again.. where I have loads of different ideas for armies swirling around in my head. The other week I was certain I was going to take Ogres to Throne of Skulls next March (ish), but since then I’ve got both the Tomb Kings and the High Elves back out of their dusty cases.

The High Elves went back in as they’re only spray painted (and I can’t settle on a scheme), the Tomb Kings however I spent a few days dry brushing all the boney parts a few months back, so really they only needed the details and metallics doing.

So last night I unpacked some of the Tomb Guard and did a few tests of the gold and ended up with this guy: 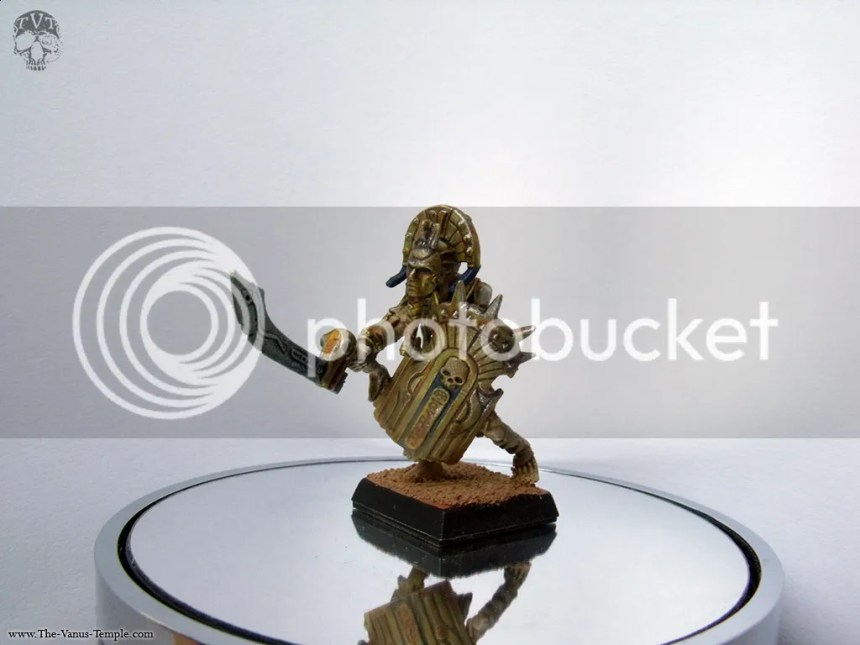 The Gold was similar to my previous Necron technique but I started with just plain vallejo air silver(71063) applied with a brush (it’s nice and thin with good coverage). I then washed it with nuln oil and two coats of cassandora yellow shade with a final light drybrush of the silver.

The bandages I had started a while back, but I went over them with Karak stone and washed with sepia with a quick highlight of Karak stone again.

Base was usual Skrag brown with Dark Sand weathering powder from Forge World.

The odd bits of blue were Kantor blue (which to my colourblind eyes looks purple?) with a glaze of blue (to convince me its blue and not purple)