This weekend I’ve been painting up the terminators for the Doubles tournament at the end of January. I decided to make a quick tutorial on how I paint the green glow effect on the eyes using the new Citadel paints. This technique is different to the previous tutorial, and also is designed for painting green glow on BLUE armour. Hopefully the techniques I use are transferable to other colours of armour! 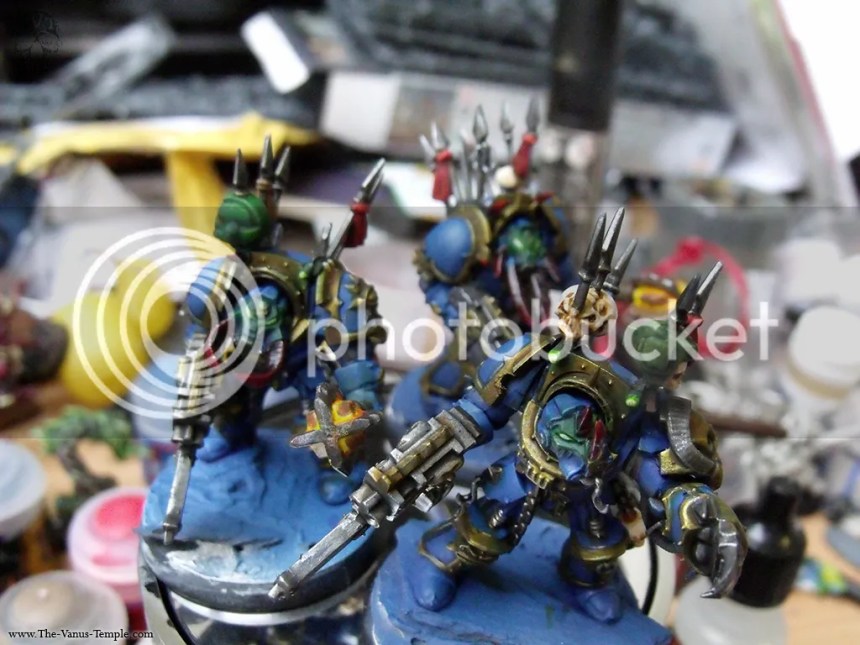 So the armour is already painted blue, I’ve painted any areas that will receive the glow from the eyes, as well as any chipping or weathering. To thin the paints I use either Lahmain Medium, or Vallejo Airbrush thinner (whichever is closest). Alternatively water can work, but I prefer the medium/thinner as I find the paint flows better and smoother!

The first step is to paint thinned Moot Green on the eye and around the eye, making sure to highlight any areas that would pick up the glow: 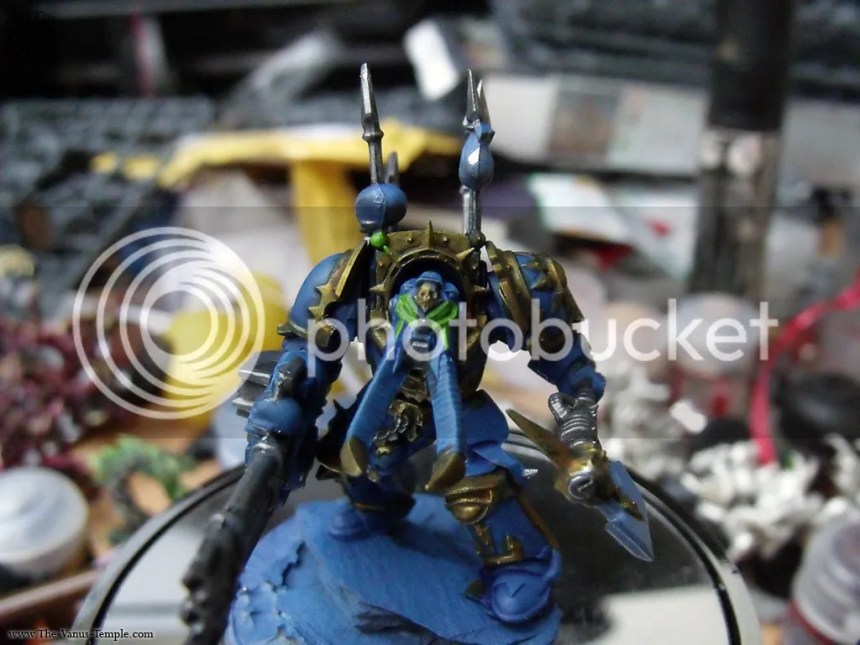 I apply a glaze of Waywatcher Green. Glazes are different to Shades/Washes. They tint the area a colour and don’t darken/seek the recesses. Don’t use too much of this stuff, imagine it like a paint and use it sparingly. It should dry in a couple of seconds of applying it and it shouldn’t be pooling! I glaze the green areas as well as the blue areas around the glow. 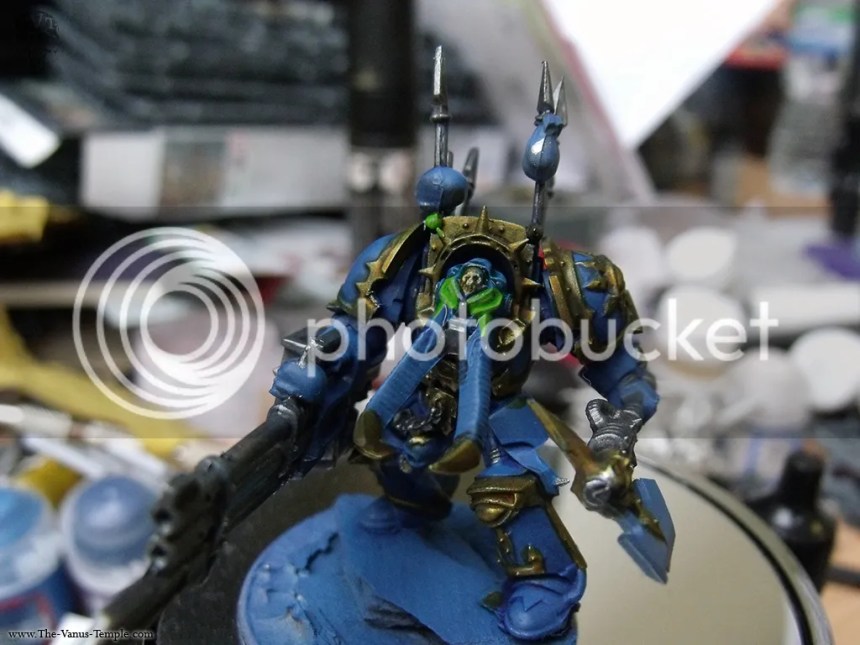 I paint the eye with Moot Green, I use a detail brush here as this and the next two stages should be neat as possible! 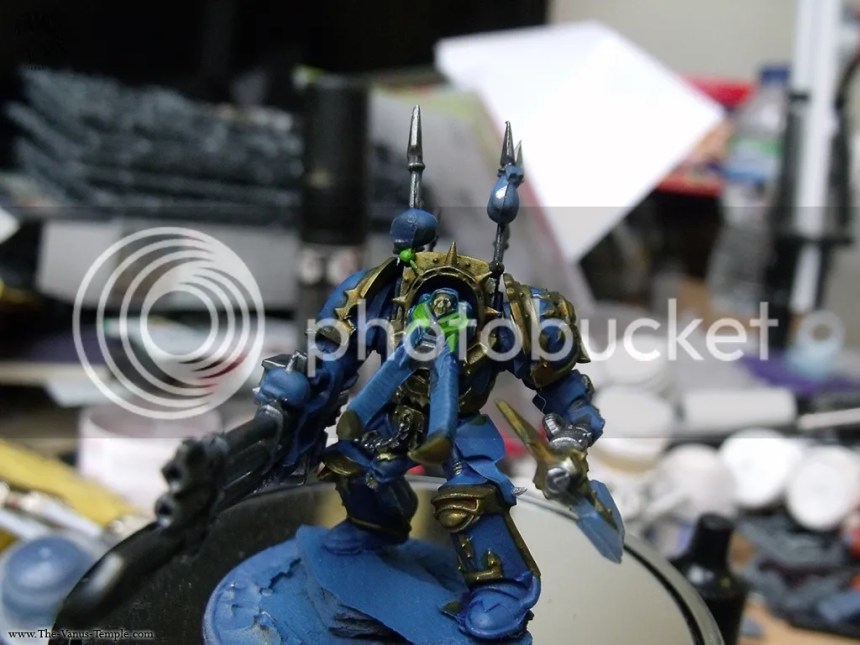 Flash Git Yellow is painted onto the lense, again I thin it a tiny amount to help it go on smoother 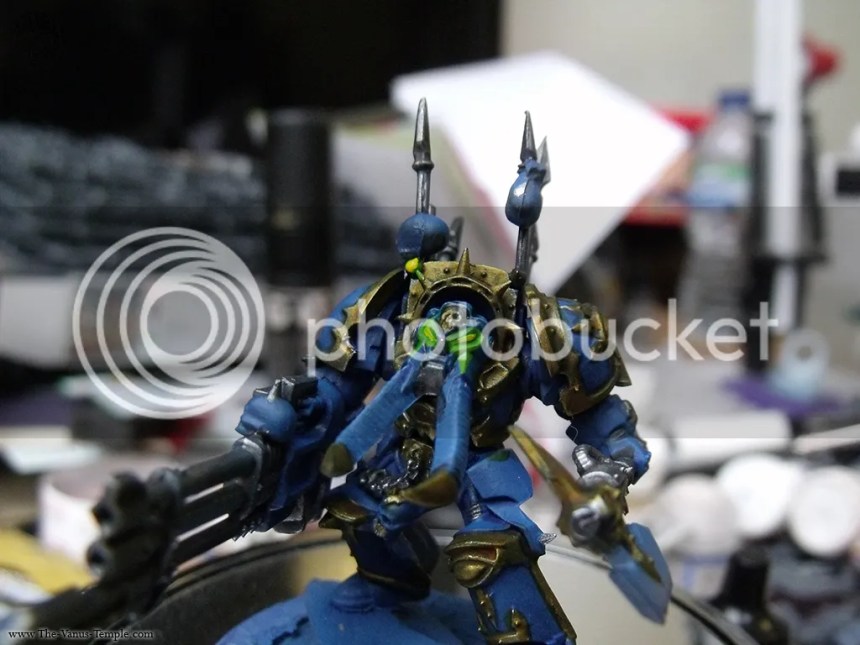 I use White Scar on the lense, I find painting from the middle outwards helps keep this neater. 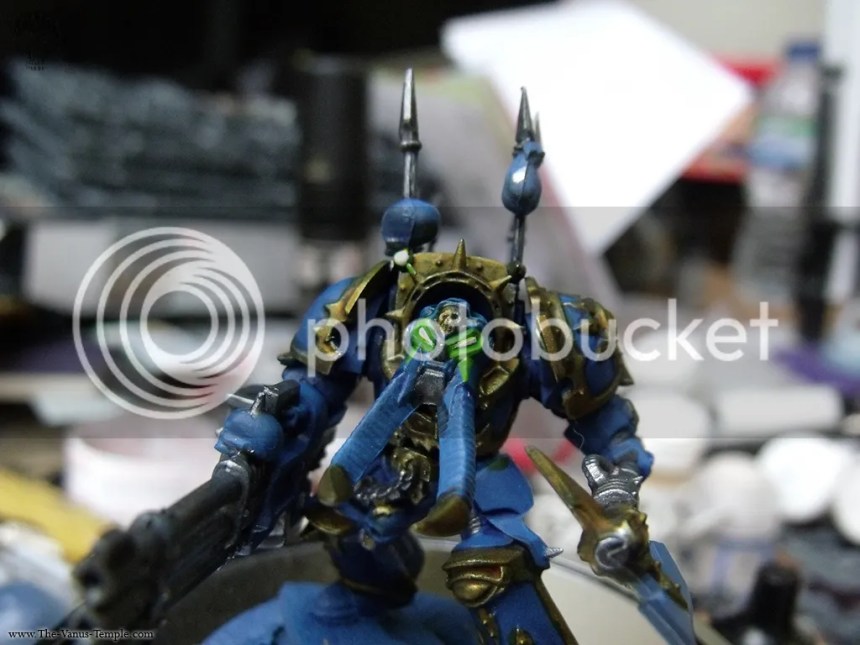 Once the white is dry I give the eye and surrounding area a glaze of Waywatcher Green. 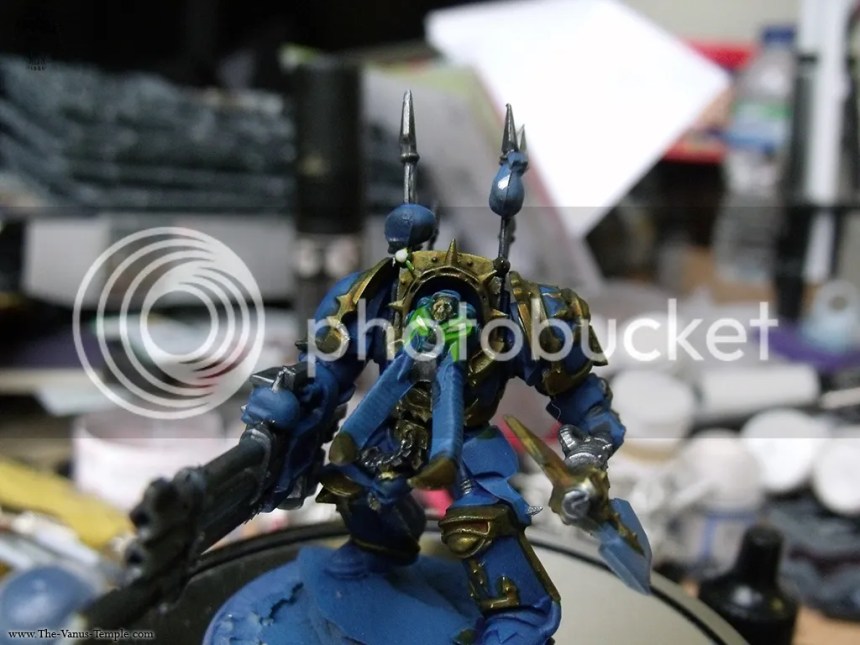 Another glaze of Waywatcher Green is applied. You can see how the white, green and yellow have merged together now: 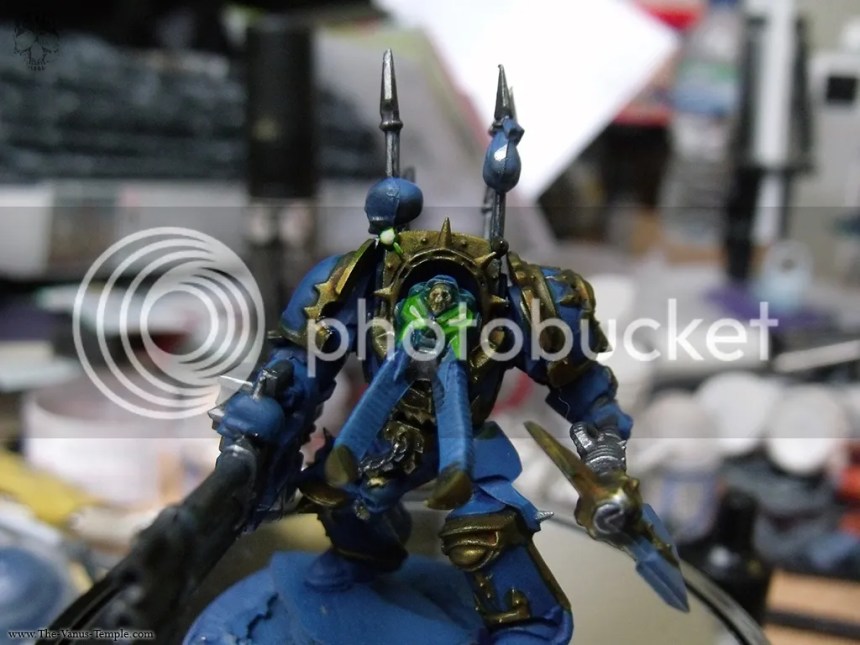 A glaze of Guilliman Blue is applied over the green areas and the blue but NOT the eye! Here we are toning down the moot green to tie in with the blue armour. 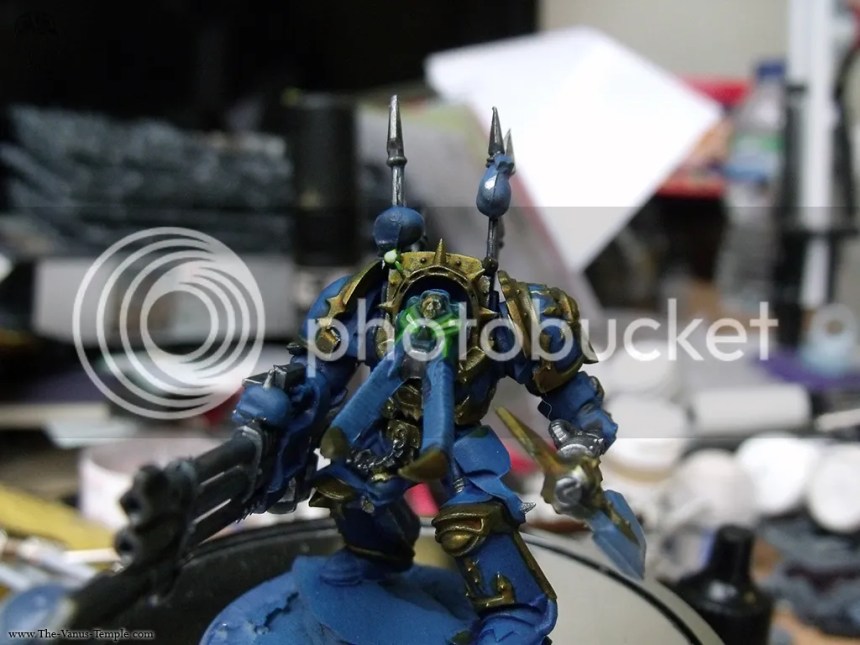 Repeat again with the blue glaze, but mainly on the green areas. You can see the difference already! 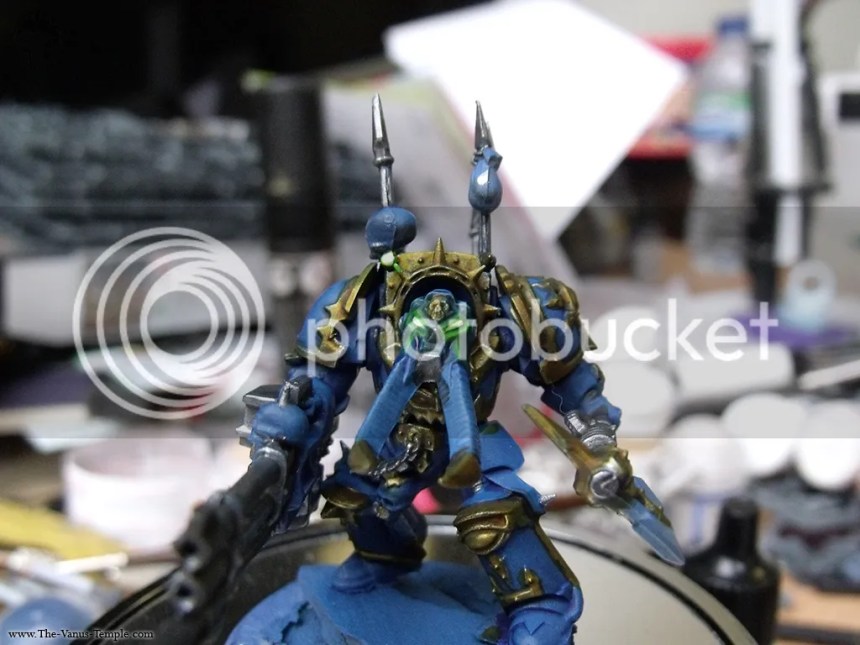 And a final third glaze of blue! The green is more subtle now and the eye stands out nicely! 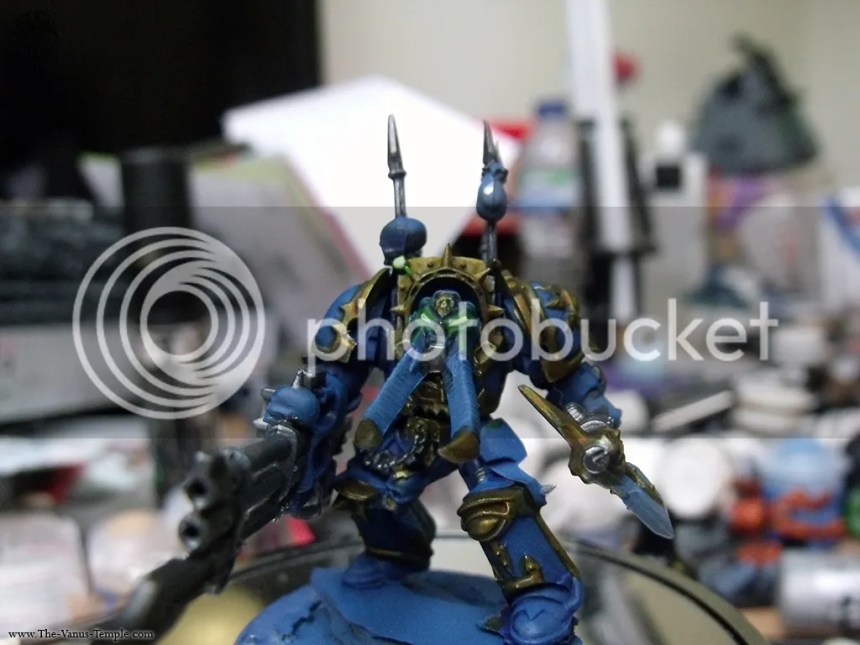 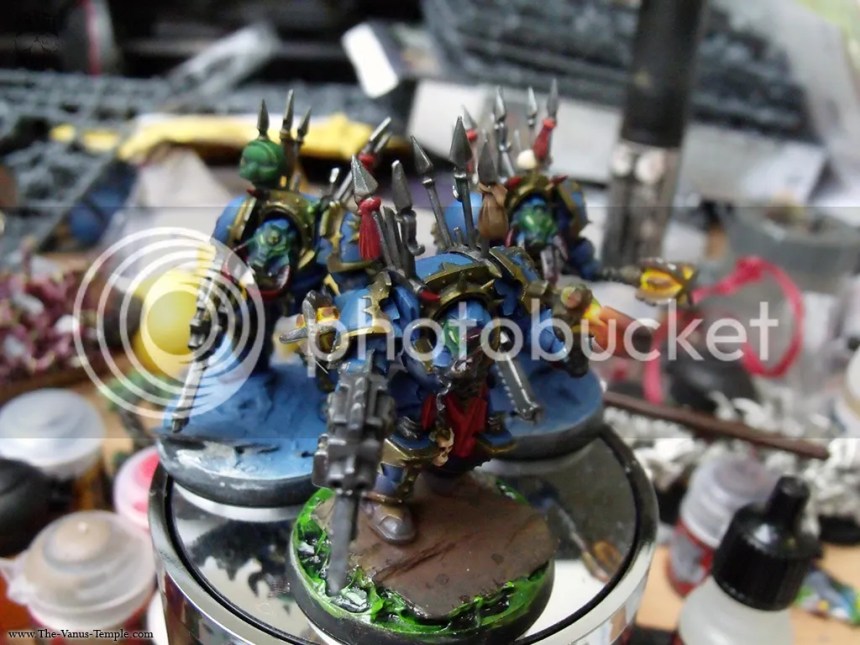